IC 342 is an 8th magnitude face-on intermediate spiral galaxy that's located in the faint northern constellation of Camelopardalis. Since positioned only 10 degrees from the galactic equator it's obscured heavily by Milky Way dust. As a result, this galaxy wasn't even discovered until famed British amateur astronomer William Frederick Denning found it in 1895. At the time it was originally thought to be a galactic nebula, but in 1934 Edwin Hubble and Milton Humason discovered its spiral nature and identified it as a galaxy. Visually IC 342 is less impressive than its magnitude suggests, but on very good nights when high overhead it's a fine sight in medium and large size amateur scopes.

The galaxy is best seen from the Northern Hemisphere during the months of November, December and January. It's circumpolar from all latitudes greater than 22N, but not well situated for southern observers where it never climbs very high above the northern horizon.

IC 342 is listed as number 5 in the Caldwell catalogue. 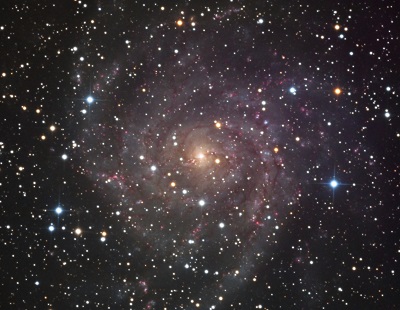 The neighbouring constellation of Cassiopeia is a good starting point to locating IC 342. First imagine a line connecting Ruchbah (δ Cas - mag. +2.7) and epsilon Cas (ε mag. +3.4) - the two easternmost stars of the "W" asterism - and then extending it in a northeasterly direction for 12 degrees. This barren region of sky is where the galaxy is found.

IC 342 has a visual magnitude of +8.4 (mag. +9.1 in blue light) and appears face-on with an apparent diameter of 21 arc minutes. With the light spread out over such a large area it suffers from a very low surface brightness. In addition, the arms are ghost like and extremely dim. Through a 100mm (4-inch) scope, the nucleus is visible surrounded by a faint haze of light that extends for about half a dozen arc minutes or so. It's easier to find in a 200mm (8-inch) scope where it appears as moderately bright circular fuzz. Only very large amateur instruments, of the order of 350mm (14-inch) or more, reveal patches of structure that hint at the spiral nature.

IC 342 is 10.8 Million light-years distant. It was first thought to be a member of the Local Group, but was later demonstrated to be outside. The galaxy is the main member of the IC 342 Group (or Maffei 1 Group), which is the nearest group of galaxies to the Local Group.

In total, IC 342 contains approximately 100 Billion stars and has a spatial diameter of 70,000 light-years. To date, no supernova has ever been discovered there.