Quadrantids - The first major meteor shower of the year 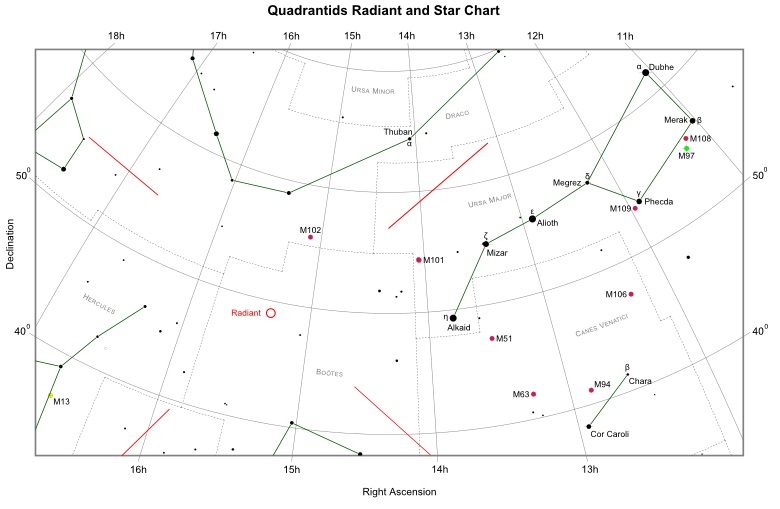 The Quadrantids are active for about 2 weeks starting at the end of December but are notorious for their short window of peak activity, lasting only about 6 hours. In 2012, the shower is expected to peak at about 07:25 UT on the 4th January with a Zenithal Hourly Rate (ZHR) of 120, one of the highest rates of all known periodical meteor showers.

For this year’s event, observers located in North America are favoured with local peaks ranging from 2:25am EST (4th January) for meteor watchers on the east coast to 11:25 PST (3rd January) for those on the west coast. In particular, observers on the eastern side of the continent are favoured as the radiant will be high in the sky at the time of maximum activity and the waxing gibbous Moon (77% illuminated) will be about to set.

However if the Moon is above the horizon from your location, all is not lost. A good tip is to stand with the Moon behind you and then look skywards, allowing yourself the darkest possible sky to view the meteor shower. As with all meteor showers the meteor trails often streak across the sky quite a distance from the actual radiant point, in many cases thirty, forty or more degrees away. They therefore can effectively appear anywhere in the sky.

The Quadrantids are best seen from the northern hemisphere. The radiant is circumpolar for locations north of latitude 41N and only briefly sets for mid-northern latitudes.

It is now believed that this shower is related to the recently discovered asteroid 2003 EH1. Along with the Geminids, the Quadrantids are the only major meteor showers not originating from a comet.