M7 is a large magnificent naked eye open cluster located in the constellation of Scorpius. It's one of the brightest open clusters and has been known since ancient times. It was first recorded in 130 AD by Greek-Roman astronomer Ptolemy and in recognition of this early observation, M7 is often referred to as the Ptolemy Cluster. Italian astronomer Giovanni Batista Hodierna observed 30 stars sometime before 1654 and Charles Messier adding it to his catalogue in 1764.

With a combined magnitude of +3.3, M7 is the brightest and most obvious deep sky object in Scorpius. It's a giant group of 80 stars with an apparent diameter of 80 arc minutes, almost 3x that of the full Moon. To the naked eye, M7 appears as a very large hazy patch with its brightest stars just about resolvable. It's so bright that it's even noticeable under suburban skies. With a declination of -34.8 degrees, the cluster is the southernmost Messier object and therefore best seen from the Southern Hemisphere particularly during the months of June, July and August. From most northern temperate locations it appears low down, at best climbing just a few degrees above the horizon. From northern latitudes above 56 degrees it never even rises.

M7 is located in eastern Scorpius, close to the Sagittarius border. It's positioned 4.75 degrees northeast of the constellations second brightest star, lambda Sco (λ Sco - mag. +1.6). Also known as Shaula, λ Sco marks the end of the Scorpions tail and part of the stinger. The Butterfly Cluster (M6) is located 4 degrees northwest of M7. 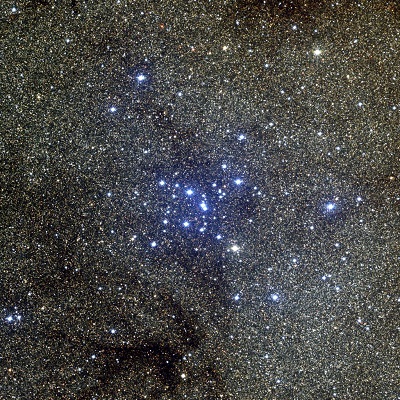 Due to its large size, M7 is best seen through binoculars or in a wide field telescope where it appears as a loose cluster of approximately twenty scattered stars. Averted vision reveals fainter background stars. Even at low powers through a 200mm (8-inch) scope, M7 will often overflow the eyepiece field of view. It appears as a very loose collection of mainly white and blue/white stars. There is one notable exception, the brightest individual member star shines at mag. +5.6 and is an orange/yellow star of spectral type G8.

In the same field of view as M7 is the faint and distant globular cluster NGC 6453. It appears as an 11th magnitude spot of fuzzy nebulosity, spanning only one arc minute across.

M7 is located about 800 light-years from Earth. It has an actual diameter of 40 light-years and is estimated to be 220 Million years old.