The latest data obtained from NASA's DAWN spacecraft - currently orbiting Vesta - suggests that the asteroid closely resembles a small planet or the moon rather than other asteroids. Results published in the journal Science on Thursday May 13, 2012 reveal that the 4.56 billion year old asteroid is believed to be a remnant intact proto-planet from the earliest time of solar system formation. This is based on an assessment of data obtained from DAWN during the 10 months in which it has been orbiting the giant asteroid.

From the information obtained, scientists confirmed Vesta has a metal-rich core, just like rocky planets Mercury, Venus, Earth and Mars. The core has been calculated to be about 220 kilometres (135 miles) across, equivalent to approx. 40% of the radius of Vesta, or roughly 18% of its total mass. 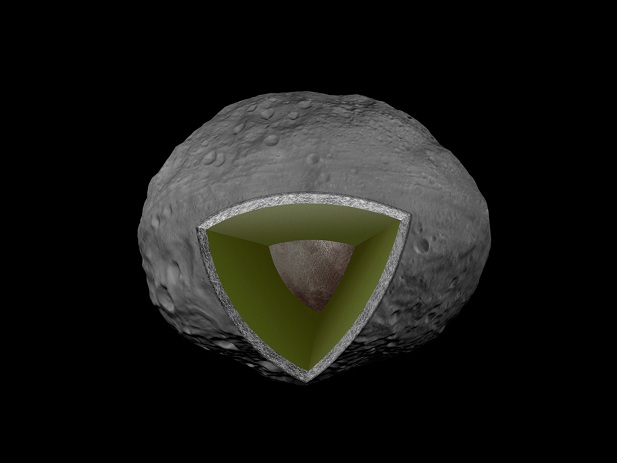 Carol Raymond, the mission principal investigator from the Jet Propulsion Laboratory (JPL) in Pasadena, California stated that DAWN has already been at a spectacular success at Vesta. She added, "It's transformed Vesta from a fuzzy orb into a planetary body, which has exceeded our expectations in many ways. Vesta is special because it has survived the intense collisional environment of the asteroid belt for billions of years, allowing us to interrogate a key witness to the events at the very beginning of the Solar System."

Vesta is one of the largest asteroids in the Solar System, with a mean diameter of about 525 kilometres (326 miles). The DAWN spacecraft was launched on September 27, 2007 to first study Vesta before moving onto dwarf planet Ceres. It has been in orbit around Vesta since July 2011 with a planned departure for Ceres on August 26, 2012 arriving sometime around February 2015.