The Planets this Month - October 2016

Mercury remains visible during the first part of the month as an early morning object from northern and tropical latitudes. The smallest planet was at its best at the end of September when it passed through greatest elongation west (GEW). As October progresses it gradually draws into the Sun until finally lost from view later in the month.

In terms of visibility, the daily diminishing altitude of Mercury is partly offset by the planet's brightening. For example from London, Mercury shines at mag. -0.8 and appears almost 8 degrees above the horizon, 45 minutes before sunrise on October 1st. Later on the 11th, it has brightened to mag. -1.1 but now only 3 degrees above the horizon. In addition, on the same day the planet passes a degree north of Jupiter. At mag. -1.7 slightly brighter Jupiter may act as a guide to locating Mercury, although both planets will be battling against the bright twilight sky. It's worth noting despite appearing close together in the sky, Jupiter is five times more distant than Mercury. Not long after that, Mercury disappears from view as it heads towards superior conjunction on October 27th.

The chart below shows the morning apparition from latitude 51.5N (e.g. London, England). A similar view exists at other northern temperate latitudes. Those at southern latitudes are out of luck, Mercury is badly placed and not observable on this occasion. 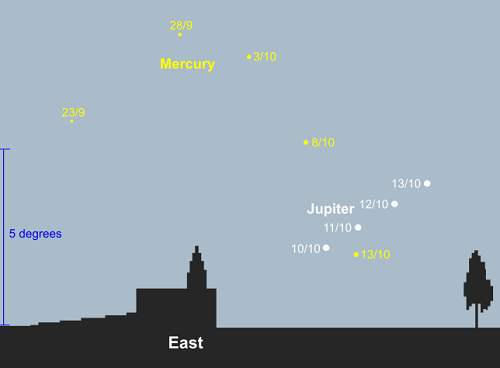 Venus remains a brilliant object in the western sky after sunset. During October it increases slightly in brightness from mag. -3.9 to -4.0. The visibility of Venus is also continuously improving and by months end the planet can be seen for an hour after sunset from mid-northern latitudes and up to 3 hours for locations further south.

There are a handful of pleasant viewing opportunities with Venus this month. On October 3rd, the waxing crescent Moon passes 5 degrees north of the planet. Later on the 26th, Venus moves to 3 degrees north of red supergiant Antares (α Sco - mag +1.0) and then four days later it passes three degrees south of Saturn (mag. +0.6). In between on the 28th, it's positioned approx. midway between Antares and Saturn. Of course, there is no similarity in magnitude; Venus is 70x brighter than Saturn and 100x brighter than Antares!

During October, the phase of Venus decreases from 85% to 78% with its apparent size increasing marginally from 12 to 14 arc seconds.

Mars remains an evening object throughout October. The "Red planet" is now fading and well past its best but still bright enough to be easily found as it moves direct (eastwards) amongst the stars of Sagittarius. With a southern declination of 26 degrees, Mars is better seen from southern and tropical latitudes. For example from northern temperate locations, it appears low down and sets by mid-evening. From southern locations, it's much higher in the sky and sets around midnight.

During October, Mars decreases in magnitude from +0.1 to +0.4 with its apparent size reducing from 8.8 to 7.5 arc seconds. The waxing crescent Moon passes 7 degrees north of the planet on October 8th. 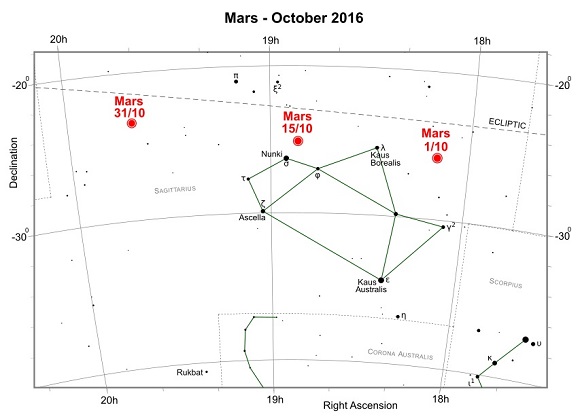 Jupiter emerges from the morning twilight during the second week of October, becoming visible above the eastern horizon just before sunrise for northern and tropical based observers. The "King of the planets" shines at mag. -1.7, brighter than any night-time star but towards the lower end of its magnitude range. From southern temperate locations, it's unlikely to been seen until near the end of month.

Saturn, mag. +0.6, continues to move slowly direct in Ophiuchus a few degrees northeast of Antares. At the start of the month the planet is visible just after sunset low down above the west-southwest horizon from northern latitudes. However, it's not long before Saturn is swamped by the bright twilight sky and by months end it will be inconveniently low down and difficult to spot. From southern and tropical locations, the planet is better placed and can be seen above the western horizon throughout the month.

On October 6th, the waxing crescent Moon passes 4 degrees north of Saturn and as mentioned above, Venus moves between Saturn and Antares on October 28th. 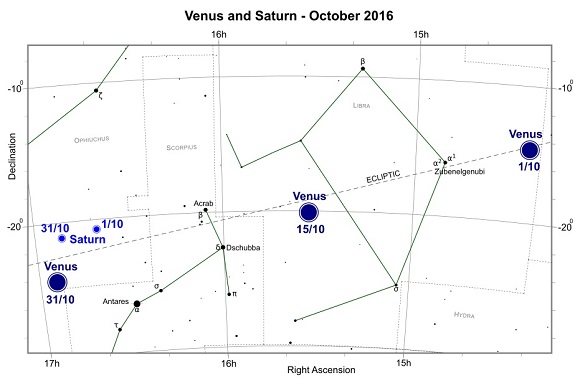 Uranus in Pisces reaches opposition on October 15th and therefore visible all night long. The distant "Ice World" rises above the eastern horizon at sunset, reaches its highest point in the sky during the middle of the night before setting in the west as the Sun re-appears. At mag. +5.7, it's an easy binocular target and under dark skies faintly visible to the naked eye. The day after opposition the full Moon passes 3 degrees south of the planet and since the Moon is at perigee it appears larger and brighter than usual, a so-called "Super Moon". 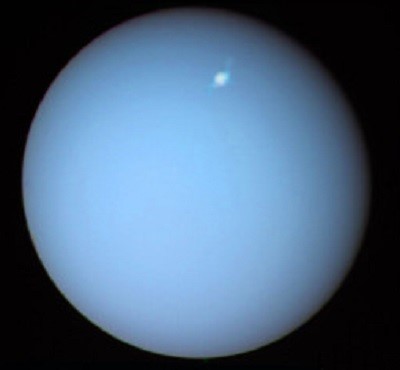 Uranus is positioned about 15 degrees south and about 25 degrees east of the centre of the "Great Square of Pegasus", close to the mid-point of an imaginary line connecting omicron Psc (ο Psc - mag. +4.3) and epsilon Psc (ε PSc - mag. +4.3).

At opposition, Uranus is located approx. 18.951 AU (approx. 2835 million km or 1762 million miles) from Earth. The planet has an apparent diameter of 3.7 arc seconds and through a small telescope at high magnifications it appears as a small, obviously non-stellar, green disk. However, even with the largest amateur scopes it's difficult to make out any atmospheric details. 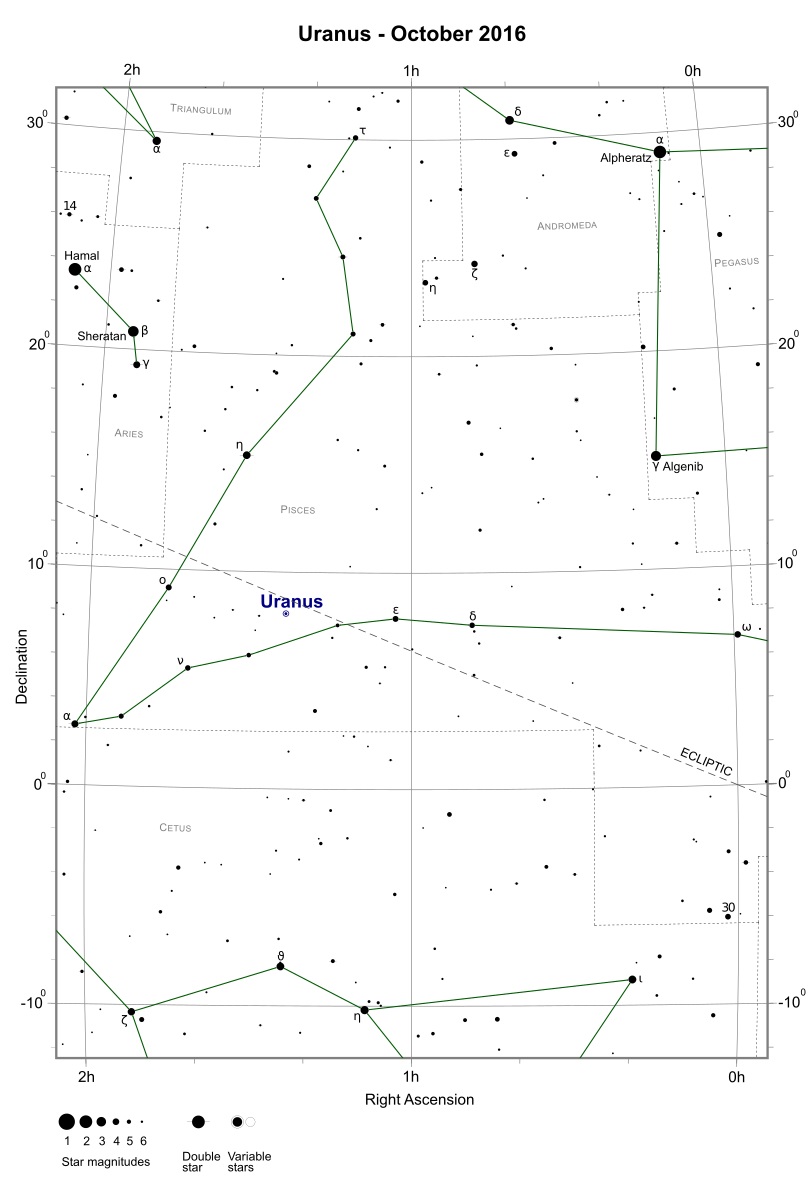 Neptune continues to move very slowly retrograde (westwards) in Aquarius during October. The most distant planet is now a month passed opposition but remains well placed for observation, visible as soon as it's dark enough and for most of the remaining night. Although beyond naked eye visibility it's relatively easy to spot with binoculars. During October, Neptune fades slightly from mag. +7.8 to +7.9.

Aquarius is the tenth largest constellation in the sky but it's faint. Its brightest star Sadalsuud (β Aqr) shines at only mag. +2.9 with most other stars notably fainter. Despite this the planet isn't difficult to find once one is familiar with the correct region of sky. To locate Neptune look about 30 degrees southwest of the centre of the Great Square of Pegasus and 2 degrees southwest of star lambda Aqr (λ Aqr - mag. +3.7). Positioned about 20 degrees or so further south is first magnitude star Fomalhaut (α Psc - mag. +1.2). 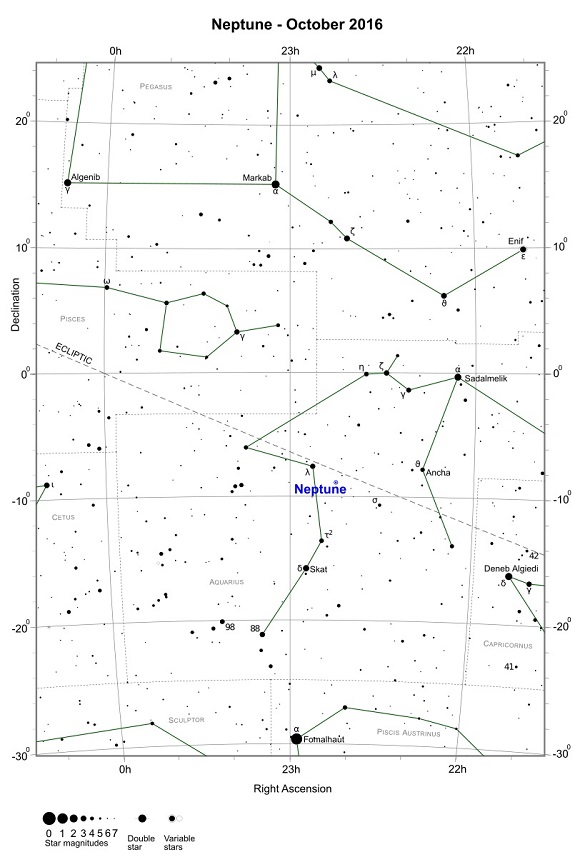