Mercury reaches superior conjunction on April 10th and is therefore too close to the Sun to be seen at this time. However it doesn't take long before the fast moving planet reappears in the early evening sky. From northern and equatorial latitudes, it's visible from about April 21st or so, low down above the west-northwestern horizon just after sunset. For northern observers this also happens to be the most favourable evening apparition of the year.

The following day Mercury (mag. -1.4) passes just over a degree north of Mars (mag. +1.4). Binoculars will show both objects in the same field of view with Mercury 15 times the brighter. A 200mm (8-inch) telescope at medium to high magnification should reveal the disks of both planets although they are both small (Mercury 5.7 arc seconds, Mars 3.8 arc seconds). In the same region of sky and positioned a few degrees to the northeast of the pair is much more brilliant Venus (mag. -4.1).

Mercury then continues to climb higher each subsequent evening, although at the same time fading in brightness, until it reaches greatest eastern elongation on May 7th. From the Southern Hemisphere the planet is nowhere near as well placed for observation but may still be glimpsed extremely low down above the west-northwestern horizon just after sunset towards the end of the month.

The chart below shows positions of Mercury and Venus from latitude 52N (e.g. London, England). The view will be similar from other northern temperate locations. 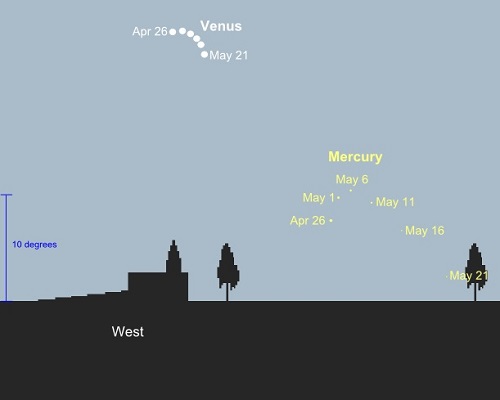 Brilliant Venus, mag. -4.1, continues to dominate the western sky after sunset. The unmistakable planet is visible as soon as dark enough although the period of visibility varies considerably depending on location. From northern temperate latitudes Venus sets almost 3.5 hours after the Sun at the start of the month, increasing to 4 hours by months end. However, much further south the planet can be seen for as little as 2 hours.

On April 11th, Venus passes 2.5 degrees south of beautiful open cluster the Pleiades (M45). This grouping makes a wonderful pairing for binoculars or wide-field telescopes. Later in the month (April 21st) it's located 7.5 degrees north of Aldebaran and another open cluster, the large sprawling Hyades. On the same evening the waxing crescent Moon passes 7 degrees south of Venus.

The long Mars period of visibility finally comes to an end in April. For sometime now the famous Red planet has kept ahead of the Sun in the early evening sky but this month it's eventually lost to the bright twilight. From Northern Hemisphere latitudes the planet can be glimpsed just after sunset towards the west during the first half of April. With an apparent magnitude of +1.4 it's looks like an unremarkable first magnitude "star". On April 22nd, Mercury (mag. -1.4) passes just over a degree north of Mars (mag. +1.4).

From southern latitudes, Mars is to all intent and purpose only visible during the first few evenings of the month.

Jupiter is now two months past opposition and despite fading in brightness it remains a brilliant evening object. As soon as darkness falls, the Solar System's largest and dominant planet is easily recognisable as a bright beacon of light amongst the faint stars of Cancer. From latitudes of Northern Europe and America, the giant planet sets after midnight by months end although the period of visibility is much reduced for those located further south.

Jupiter begins the month moving retrograde until April 8th when it reaches its second and final stationary point for 2015. After this direct motion (eastward) is again resumed with the event widely regarded as signalling the end of the opposition period. To the unaided eye, Jupiter will essentially appear stationary during April. However during the upcoming months direct motion will be obvious as it finally leaves Cancer and marches on towards Leo and Regulus. 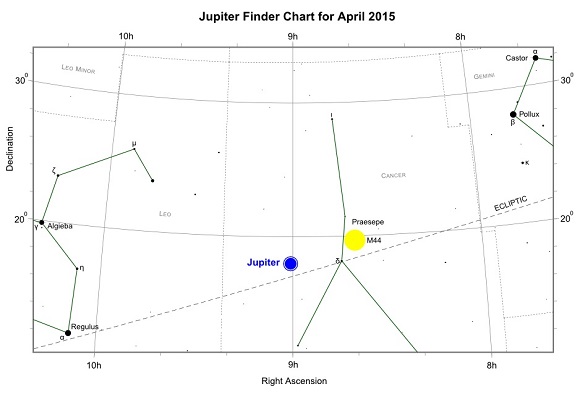 Saturn continues to move slowly retrograde in northern Scorpius. The stunning "Ringed Planet" is located near the stars of the Scorpion "Sting" as it heads towards next month opposition. Saturn rises during the evening and remains visible for the rest of the night although it can be seen for considerably longer from equatorial and Southern Hemisphere latitudes. The planet also appears higher in the sky from such locations. 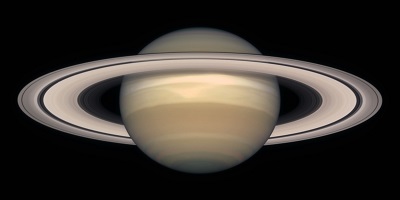 To the naked eye Saturn appears creamy in colour. It makes a nice contrast compared to the orange/red hue of first magnitude red giant Antares (α Sco mag. +1.0) located 8 degrees to the southeast. Through a telescope the planets rings are a beautiful sight. They are visible with just a small instrument and currently tilted so that they are wide open (tilted at 24 degrees). A medium size telescope of 150mm (6-inch) or 200mm (8-inch) aperture will show a wealth of details including subtle planet formations, divisions in the rings as well as up to half a dozen of Saturn's satellites.

During the month, Saturn brightens slightly from magnitude +0.3 to +0.1 with it apparent size increasing marginally from 17.8 to 18.4 arc seconds. On April 8th, the waning gibbous Moon passes 2 degrees north of Saturn. 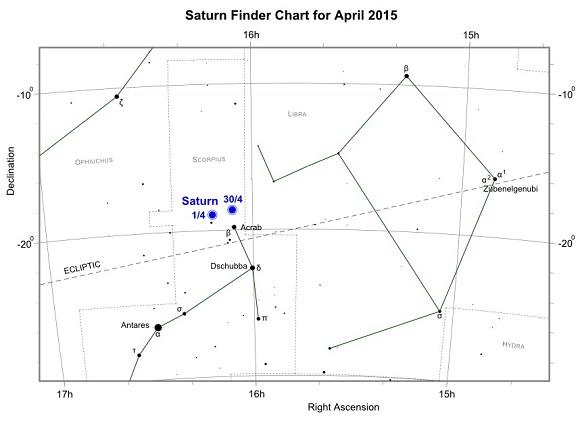 Uranus reaches solar conjunction on April 6th and is therefore unsuitably placed for observation throughout April.

Neptune, mag. +8.0, reached solar conjunction at the end of February but remains unsuitably placed for observation from northern temperate latitudes during April. However, it can be seen in the early morning sky towards the east from equatorial and southern regions. By months end it rises up to four hours before the Sun from such locations.

The outermost planet of all is currently located in the faint constellation of Aquarius. Neptune never comes close to naked eye brightness though it can be seen with binoculars or small telescopes. On April 14th, large asteroid Vesta passes 2.7 degrees south of Neptune. Both objects are of the same magnitude and wide field scopes should easily show them in the same field of view. 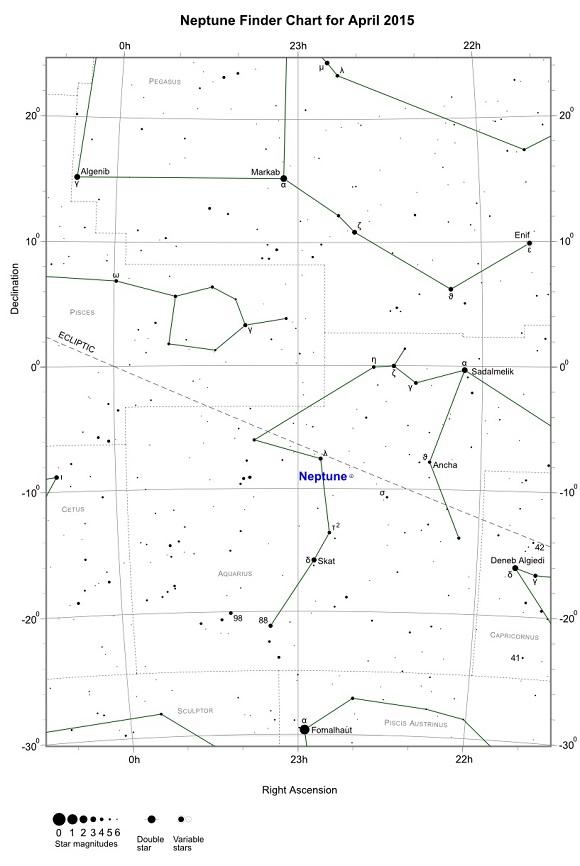