M81, also known as Bode's galaxy, is a large bright spiral galaxy located 11.8 million light-years away in the constellation of Ursa Major. With an apparent magnitude of +6.9, it's easily visible with binoculars and is a superb target for all sizes of telescopes. This galaxy is a striking example of a grand design spiral and exhibits near perfect and well defined spiral arms.

In the same binocular and low magnification telescope field of view as M81 is another prominent galaxy, M82. At mag. +8.4, M82 is fainter than M81 and a very different type of galaxy. It's a starburst galaxy, in which stars are been formed at exceptionally high rates. Also known as the Cigar galaxy, M82 is the prototype object and provides a striking contrast to the near perfect spiral shape of M81. Together, they form a popular visual and imaging target for amateur astronomers.

Both M81 and M82 were discovered by Johann Elert Bode on December 31, 1774. Pierre Mechain independently rediscovered them in August 1779. He reported his observations to Charles Messier who added them both to his catalogue on February 9, 1781.

Finding M81 is not particularly difficult as the famous Plough asterism of Ursa Major can be used as a starting point. First focus on Dubhe (α UMa - mag. +1.8), the northwest corner star of the bowl. The M81 / M82 pair is located 10 degrees to the northwest of this star with M82 positioned 38 arc minutes directly north of M81. 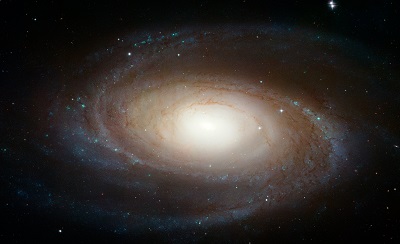 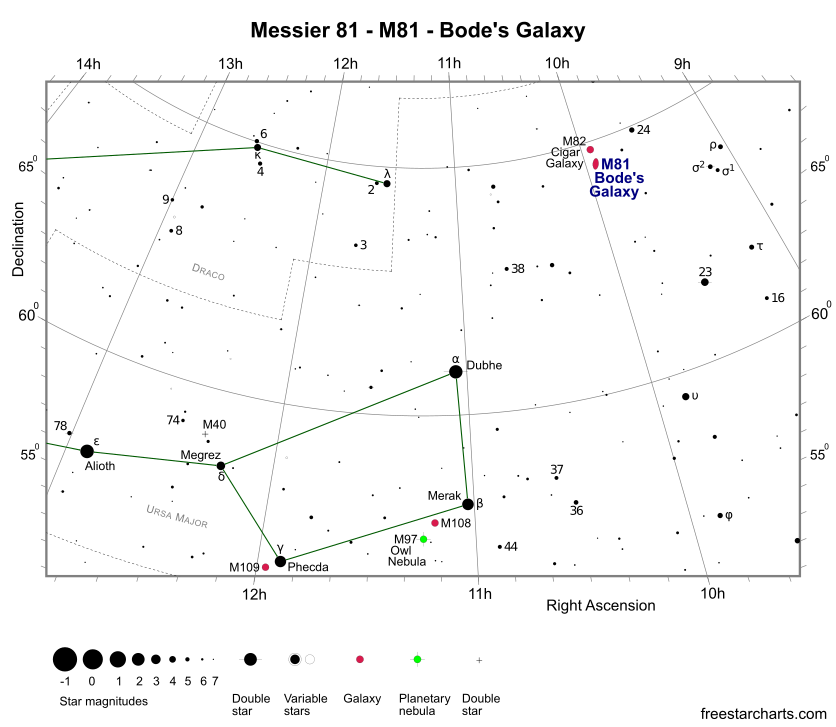 M81 appears a faint patch of light in 7x50 or 10x50 binoculars. There are rare reports that some eagle-eyed stargazers have managed, under exceptional conditions, to see M81 with the naked eye. That would make it by far the most distant permanent object that can be viewed without a telescope. However, usually M33 is regarded as the holder of this record.

Small 80mm (3-inch) refractors at low powers reveal M81 as a bright oval haze without detail. In the same field of view is M82, which appears as a slim grey needle of uniform light. A 150mm (6-inch) scope at high powers shows a bright core surrounded by a huge halo of nebulosity. In larger scopes more subtle details can be seen. A small unbarred spiral galaxy, NGC 2976, lies 1.5 degrees to the southwest of M81 and can be seen without detail through a 200mm reflector.

M81 has an apparent size of 27 x 14 arc minutes, which corresponds to a spatial diameter of 90,000 light-years. It's estimated to contain more than 250 billion stars and is the largest member of the Ursa Major or M81 group of galaxies. M82 is also a member of this group, which is one of the closest groups of galaxies beyond our Local Group. These galaxies are best seen from the Northern Hemisphere during the months of March, April and May. From locations north of +21 degrees they are circumpolar and therefore never set.