So far, Comet PanSTARRS has been visible for many months from the southern hemisphere but now its time for the northern half of the globe to get their first chance to catch a glimpse of this dirty ice ball.

Inevitably, as PanSTARRS heads northwards an abundance of articles have recently appeared in the northern press detailing its up and coming performance. Many articles are excellent but some give a slightly misleading impression. Unfortunately, part of the problem is that PanSTARRS has not lived up to its original star billing. The comet was predicted to be a dazzling sight, reaching magnitude -1 or brighter during the second half of March. At such luminosity, it would have been a spectacular naked eye object, unmistakable in the March evening twilight sky. 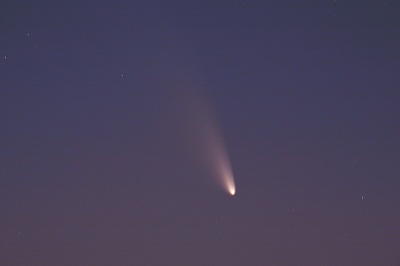 From recent observations made from the southern hemisphere, it's now clear that PanSTARRS will fall short of its original stellar predictions. However, certainly all is not lost and the comet should still peak close to 1st magnitude...which is not bad at all. This compares favourably with past comets and comets this bright usually only grace our skies on average about once every 5 years. PanSTARRS has now been visible to the naked since the middle of February and has so far received some glowing reports from those in the southern hemisphere lucky enough to see it.

PanSTARRS should be within naked-eye range from northern temperate locations from about March 12th until April 1st. Sadly, it won't be the dazzling showstopper once thought, but should still put on a superb performance. The main observational barrier during this time is that it will not appear very high above the western horizon and subsequently has to battle against the background twilight glow.

We recommend viewing the comet with a pair of binoculars or a small or wide-field telescope at low magnifications. Find somewhere with a relatively unobstructed view of the western horizon and start looking for the comet about 30 to 40 minutes after sunset. As the sky darkens you should be able to spot the comet low above the horizon (of course weather permitting). PanSTARRS is joined by the extremely thin crescent two-day old Moon on March 12th. The comet then climbs higher in the sky each subsequent night, but at the same time dims in brightness. Peak magnitude of 1.6 occurs on March 10, before it decreases to mag. 3.7 on March 22nd and down to mag. 5.5 by April 1st.

The table below shows the altitude and magnitude of PanSTARRS from latitudes of 40N (e.g. New York) and 51.5N (e.g. London), 45 minutes after sunset. The altitude figures will be similar from other locations with similar latitudes.

Comet PanSTARRS altitude, 45 minutes after sunset when seen from latitudes of 40N and 51.5N