The annual Lyrids meteor shower peaks during the night of April 21st / 22nd. This year's event promises to be reasonably good as the first quarter Moon sets a couple of hours after midnight and won't significantly interfere. Normally, you would expect to see up to 20 meteors per hour under ideal conditions. However, if you're lucky you might even spot a couple of fireballs. Occasionally the shower produces a few, that brilliantly streak through the sky, casting shadows as they disintegrate in the upper atmosphere.

Unlike sporadic meteors that originate from anywhere, periodic meteors can always be traced back to the same part of the sky, known as the (radiant). Therefore, spotting this type of shooting star should be easy; just look directly at the radiant. The problem is although the meteors do originate from the radiant, they almost always streak many degrees from away in a different part of the sky. Therefore a good tip is to lie down on a reclining chair, look skywards and scan a large area of sky surrounding the radiant, without looking directly at it.

The Lyrids radiant is located inside Hercules. It's positioned close to the border with Lyra and only 6 degrees from Vega (mag. 0.0), the 5th brightest star in the sky. The best time to observe is around midnight and during the early hours of the morning. 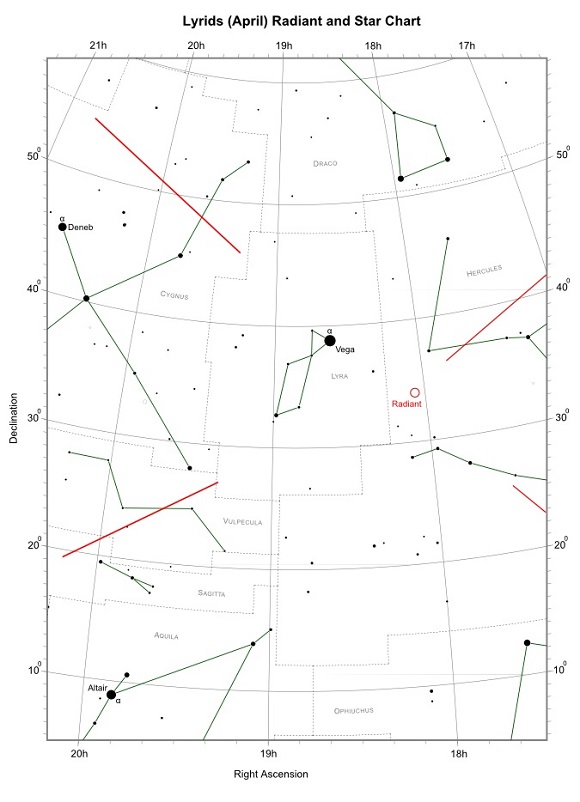