Jupiter is now a spectacular dazzling sight amongst the stars of Gemini, visible all night long as it dominates the night sky. On January 5, 2014 the planets visibility period culminates when it reaches opposition.

On January 5th, the date of opposition, Jupiter is located 4.21 AU (629.87 million kilometers or 391.38 million miles) from Earth. Although in 2014, Jupiter is slightly further from Earth than during the two previous oppositions its apparent size is still an impressive 47 arc seconds. Of all other planets, only Venus - on rare occasions - displays a greater apparent size than Jupiter.

Jupiter current location is about as good as it gets for Northern Hemisphere astronomers. The planet appears high in the sky and perfectly placed for observation. From Southern Hemisphere latitudes, Jupiter appears much closer to the horizon, but still unmistakable due to its brilliance. 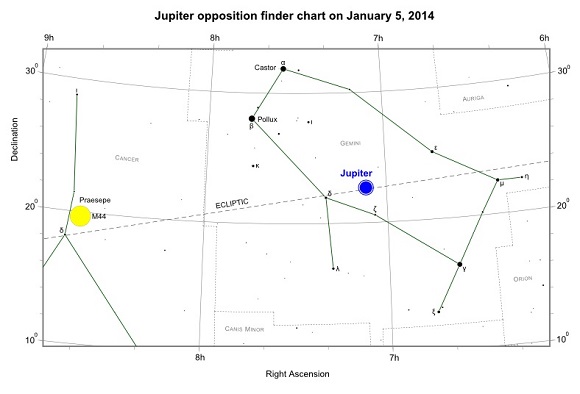 Popular 7x50 and 10x50 binoculars reveal the disk of Jupiter. It appears off white or creamy coloured but no surface details are visible. Also visible are the four large Galilean moons (Io, Europa, Ganymede and Callisto). The moons continuously change position as they orbit Jupiter and sometimes all four are visible, but on other occasions some or all of the satellites will be temporarily obstructed and hidden as they pass behind or in front of Jupiter's disk.

The moons of Jupiter are theoretically all bright enough to be seen with the naked eye, although their close proximity to the searchlight like beam of Jupiter makes this task virtually impossible. However, a few very keen eyed observers have claimed to spot the moons without optical aid. At opposition this year, Io shines at magnitude +5.0, Europa magnitude +5.3, Ganymede magnitude +4.6 and Callisto at magnitude +5.7. 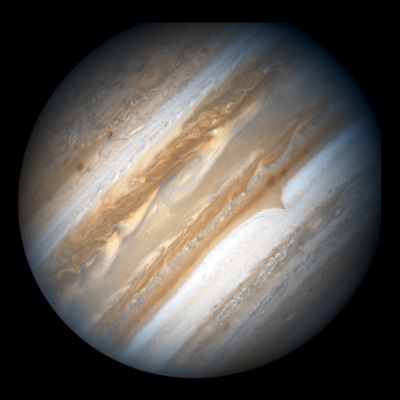 Through a telescope a wealth of detail is visible on the planets disk. Even a small 60mm (2.4-inch) telescope at medium to high magnification will begin to show some surface detail including the great Northern and Southern Equatorial belts. Keen eyed observers under good seeing conditions may even be able to notice the shadow transits of the Galilean moons. A larger 100mm (4-inch) telescope will reveal more details in the belts including bright and dark spots. Also visible is the most famous storm of all on Jupiter "The Great Red Spot". With a 200mm (8-inch) telescope or larger, Jupiter is a spectacular sight with the brighter features well defined along with all sorts of intriguing and subtle details.

Generally, if the seeing conditions are good it is possible to push a telescope close to the magnitude limit when observing Jupiter. The accepted values are 50x for every 25mm (1-inch) of aperture. So up to 200x for a 100mm (4-inch) telescope and 400x for a 200mm (8-inch) telescope.

But as always whatever telescope you are using or even just with the naked eye, Jupiter is a fantastic object to view especially around the time of opposition.