A new nova, easily visible with binoculars, has just been discovered in the constellation of Delphinus. The object was found by Japanese amateur astronomer Koichi Itagaki of Yamagata on August 14, 2013 using a 7-inch reflecting telescope with an attached CCD camera. It currently shines at magnitude +6.0 (August 15).

Novae are outbursting stars. They occur when a compact white dwarf star accretes so much material from a close companion that it undergoes a thermonuclear explosion on its surface. This lead to a brief dramatic sudden increase in brightness. They are different to supernovae where a catastrophic destructive event is caused by the collapse of the core of the star.

The finder chart below shows the position of the nova. It's located 14 degrees to the northeast of first magnitude star Altair (α Aqr - mag. +0.8) which forms one corner of the well-known Summer Triangle, along with Vega (α Lyr – mag +0.0) and Deneb (α Cyg - mag +1.3). 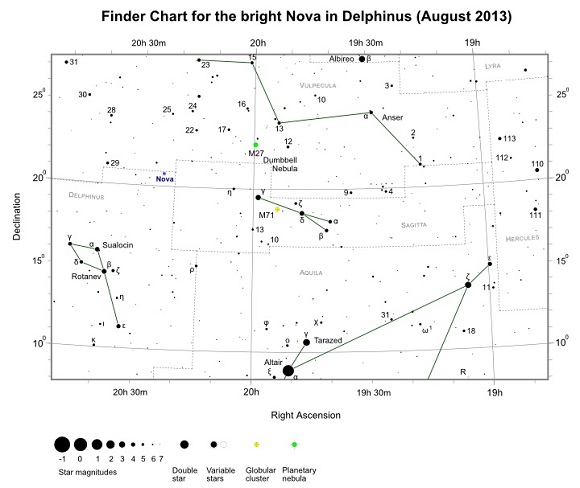 Finder Chart for the bright nova in Delphinus - pdf format

Delphinus and the surrounding constellations are visible towards the southeast (northern hemisphere) / northeast (southern hemisphere) as soon as its dark enough. Once familiar with the area of sky, focus on star 29 Vul (mag. 4.8). Just 3.5 degrees west of this star is the nova. From a very dark site its visible to the naked eye but for most a pair of binoculars will be required. Over the next few days, it's possible the nova could brighten even further.

Nova continues to increase in brightness. Latest estimates as bright as magnitude +4.8 and therefore an easier naked eye object.

The nova seems to have peaked at approx. magnitude +4.3. It's now dimming but still visible to the naked eye.

Nova Delphini 2013 or Nova Del 2013 is down to magnitude +4.9; remains a naked eye object. Although now fading it's possible it may still produce a sudden outburst...so keep watching!