Comet Lemmon is once again observable after a short period of time when it was too close to the Sun to be safely seen. So far, Lemmon has been a comet for southern hemisphere and tropical based observers; those living in the north have not yet had a look in, but that's about to change. 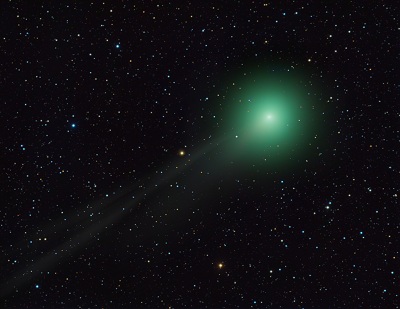 During April, Lemmon is visible low towards the east during morning twilight. Again the comet can only be glimpsed by those located in the southern hemisphere and to a lesser extent the tropics. But it's now heading on a direct northern trajectory and as a result from May, will finally be suitably placed for observation for those located further north.

Between April 15th and 17th, Mercury passes less than 3 degrees north of Lemmon. Having just past greatest elongation on March 31st, Mercury will shine at magnitude -0.1 and act as a perfect guide for locating the much fainter comet.

During May, Lemmon remains low in the eastern sky during morning twilight for observers in the southern hemisphere and tropics. However it never appears very high and it's not long before it's lost to the bright morning twilight. Although past its best, Lemmon's visibility improves on a daily basis for northern hemisphere observers. The comet is visible towards the east at the beginning of May with an improving altitude each subsequent day. However, of course the higher altitude is offset by it's diminishing brightness.

Lemmon is currently moving almost parallel to the zero line of right ascension. On April 10th, it's located amongst the dim stars of northern Cetus. It crosses the border into Pisces on April 13th, continuing on a northern path until arriving in Andromeda a month later on May 17th. During this time Lemmon will fade from about magnitude 6 to magnitude 9. Although beyond naked eye visibility, it should still be a relatively easy object through small telescopes.