November promises to be an exciting time for all as predicted wonder comet ISON reaches perihelion at the end of the month. The comet, discovered at the end of last year, has an orbit that brings it within only 0.01249 AU (1.87 million kilometres or 1.16 million miles) of the Sun. When a comet approaches our star at such a small distance anything is possible - equally possible a spectacular object visible during daytime or a disintegrating ball of ice and dust that fades away into oblivion. 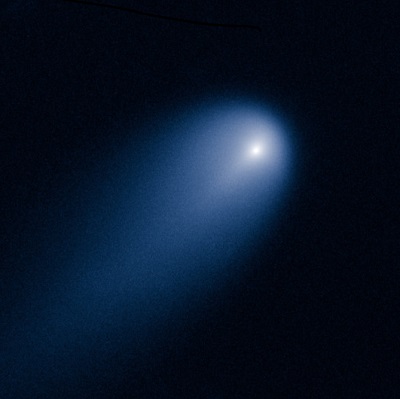 ISON is currently predicted to reach naked eye magnitude on or around November 21st. It then continues to increase in brightness until it peaks on November 29th, the date of perihelion. It's now believed for a short time that ISON could reach magnitude -6. However, as with all comets nobody can be certain and it could be magnitudes brighter or magnitudes fainter than this value. After perihelion the comet will rapidly decrease in brightness but still remain visible to the naked eye for at least another week or so.

The best location to observe ISON is from the Northern Hemisphere. It will be observable in the early morning sky towards the east throughout the brightening period. Observers in the Southern Hemisphere don't have it as good as their northern counterparts, ISON remains low down throughout this time.

The finder chart below shows the path of ISON from October 28th to November 15th. During this time it moves from Leo into Virgo and brightens from magnitude +9.9 to +7.0. It should then be within the range of binoculars. 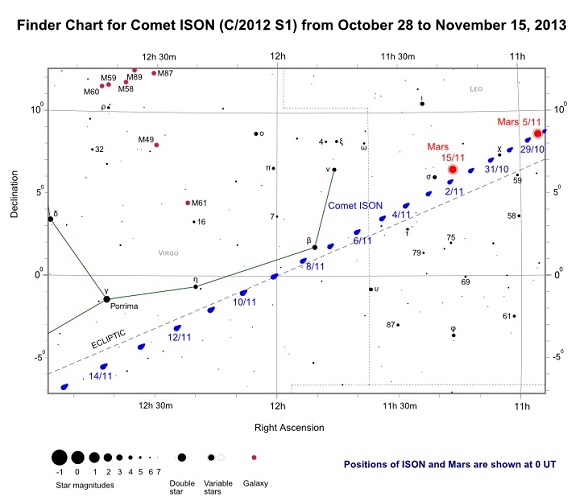