Comet PanSTARRS is now on its final charge towards perihelion (closest approach to the Sun), which it reaches on March 10, 2013. Sadly, it's been a disappointing last couple of months for comet enthusiasts tracking this object. Originally expected to be a great comet in early March, PanSTARRS was predicted to be as bright as magnitude -1 but has somewhat fizzled out since the start of the year. It is now seems likely that it will peak at only magnitude 2. Although nowhere near as bright as originally hoped, the comet should still be a naked eye object and a fine sight during March.

Comets are often very unpredictable and PanSTARRS is no exception. Just when it appeared to be sputtering, it suddenly showed an increased rate of brightening during the second week of February. Since its very difficult to predict how comets will react when they pass close to the Sun, PanSTARRS may still have a surprise in store for us. Who knows, perhaps in the end something not far short of the dazzling performance originally predicted? Only time will tell! 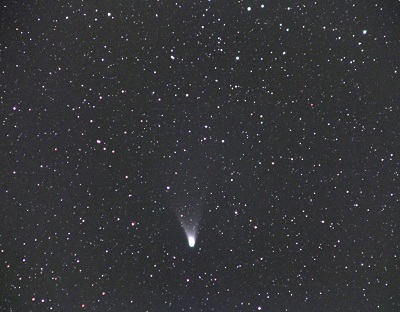 On January 31, PanSTARRS was shining at magnitude 7.0 and located in the constellation of Corona Australis. Although some 1.5 magnitudes fainter then originally predicted, the comet had still brightened sufficiently to be visible in binoculars, appearing non-stellar with a faint coma surrounding a bright nucleus. A few days later on February 5, PanSTARRS was up to magnitude 6.4 with an increased coma of 5 arc minutes in diameter. When viewed through 10x50 binoculars or a small telescope, the coma was obvious, appearing condensed and slightly elongation. The first real visually signs of a tail were also apparent. Despite spanning only about a quarter of a degree in length, this small tail should grow significantly over the coming few weeks. On February 11, the comet reached magnitude 6.1 and at the fringe of naked eye visibility. Now easily visible with binoculars, the coma was up to 7 arc minutes in diameter with a half a degree tail. The comet remained a low down morning twilight object (for southern hemisphere observers) in the constellation of Microscopium. Then came a noticeable increase in brightness that was faster than expected. PanSTARRS reached magnitude 5.4 on February 15, 0.7 magnitudes brighter than 4 days earlier. Around this time also came the first flurry of naked eye sightings arrived.

The charts below show the position of PanSTARRS until February 27, 2013. 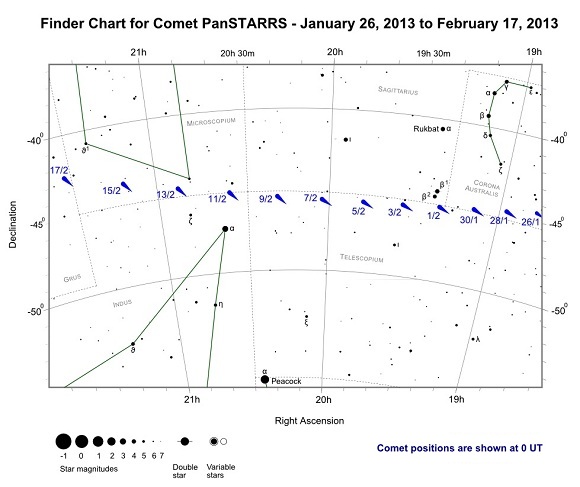 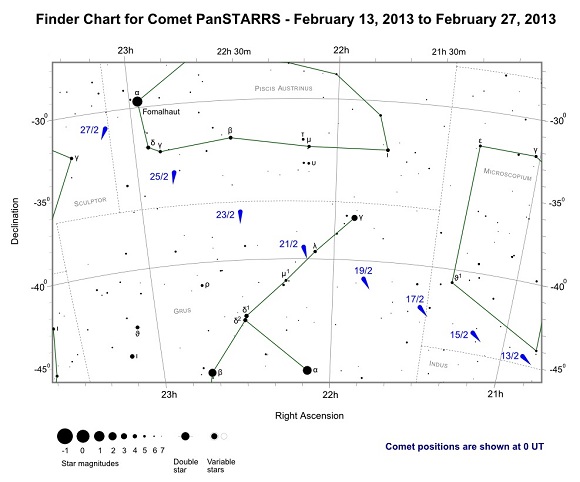 During February PanSTARRS is visible only from the southern hemisphere. For the first three weeks of the month PanSTARRS is a morning twilight object. From latitude 30 degrees south (the approximate position of Santiago, Cape Town, Perth and Sydney) the comet stood about 15 degrees above the southeastern horizon 45 minutes before sunrise and remained low above the horizon until about the middle of the month. It then draws in towards the Sun, decreasing in latitude each day. PanSTARRS then reappears in the evening sky during the last week of February and is visible very low down towards the western horizon during twilight.

On February 26, there is a great marker in the sky that aids searching for the comet. The first magnitude star Fomalhaut (α PsA - mag. 1.2) lies only 2 degrees to the north of PanSTARRS and both objects will appear very low down in the western sky during evening twilight. The best approach is to first locate Fomalhaut and then use binoculars or a small telescope to pinpoint mag. 3.5 PanSTARRS.

For northern hemisphere observers, the comet will remain invisible throughout February. They will have to wait until mid-March to catch their first glimpse of it when it appears as an early evening object.