Observers located at equatorial and southern latitudes have the chance to spot a reasonably bright comet after sunset during the second half of July and into August. The comet named PanSTARRS (C/2014 Q1) is now fading but should remain bright enough to be visible with binoculars and small telescopes for sometime to come. Unfortunately, for Northern based observers it's not observable.

Comet PanSTARRS was discovered on August 16, 2014 using the Panoramic Survey Telescope and Rapid Response System (Pan-STARRS) located on the island of Maui in Hawaii. At discovery the comet shone at a feeble magnitude +18.4.

The Pan-STARRS project is in its infancy and eventually it's planned to use an array of four 1.8m astronomical telescopes to survey the sky continuously in the hunt for moving objects. Despite funding problems and only one of the four telescopes currently up and running, the project is producing great results and when more of the telescopes come online, a flurry of asteroid and comet discoveries should occur.

Comet PanSTARRS has a highly eccentric orbit and originates from the Oort Cloud. Its orbital period is approximately 40,000 years.

Having past perihelion on July 6th, PanSTARRS climbed quickly away from the Sun as it moves from Cancer into Leo. It became visible very low down in the evening twilight sky from about July 15th and passes close to brilliant Venus and bright Jupiter during the following week. At magnitude +6, PanSTARRS is much fainter than the two planets but is visible with binoculars and small scopes. On the evening of July 18th the thin crescent Moon forms a lovely evening grouping with Venus, Jupiter and PanSTARRS.

The comet then climbs higher in the evening sky but at the same time fading as it travels on a southerly path into Sextans. It then briefly cuts a corner of Hydra before entering Crater, back into Hydra and finally to Centaurus where it remains until October.

The finder charts below show the positions of the comet from July 18th to August 8th, 2015. 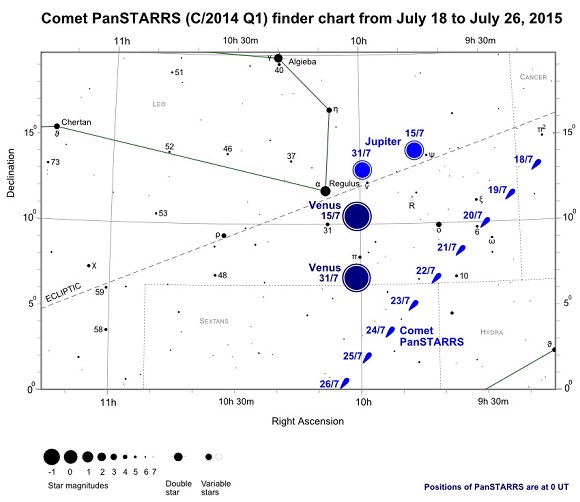