Algol eclipse dates and times for May 2018

Algol (β Per) is a bright eclipsing binary system located in the northern constellation of Perseus and one of the best-known variable stars in the sky. Often referred to as the "Demon Star", most of the time it shines at mag. +2.1 but every two days, 20 hours and 49 minutes it suddenly dips in brightness to mag. +3.4, remaining dim for about 10 hours before returning to its original state.

Why the brightness change. The Algol system consists of at least three-stars (β Per A, β Per B and β Per C) with the orbital plane of Algol A and B directly in line with the Earth. The regular dips in brightness occur when the dimmer B star moves in front of and eclipses the brighter A star. There is also an extra dimension in that a secondary eclipse occurs when the brighter star occults the fainter secondary, resulting in a very small dip in brightness that can be detected with photo-electrical equipment.

Algol is located in Perseus among the stars of the northern Milky Way. It's positioned west of mag. +0.1 Capella (α Aur) and southeast of the well known "W" of Cassiopeia. The finder chart below shows the position of Algol along with magnitude data of some surrounding stars for comparative purposes. 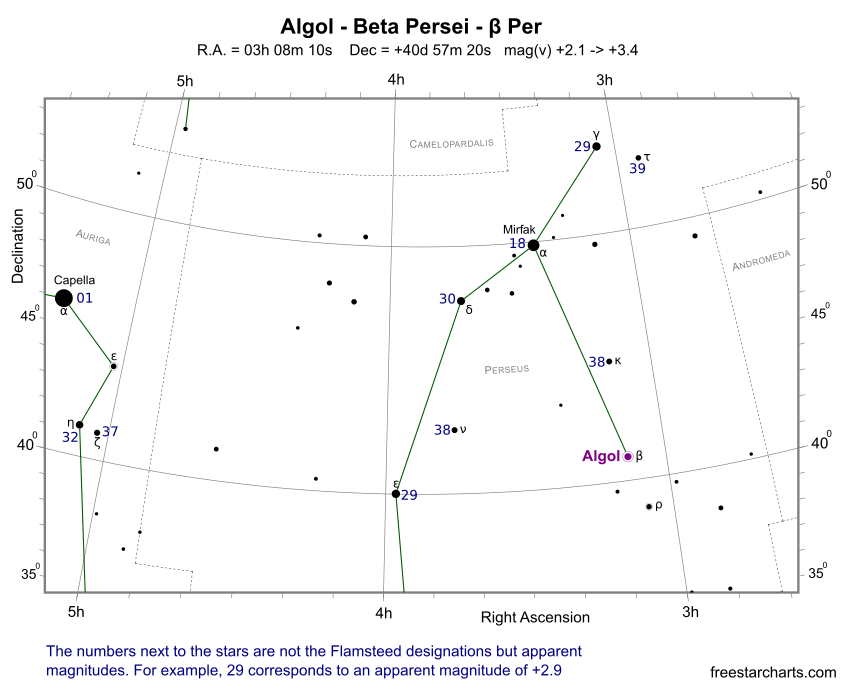 For those new to variable star observing, Algol is an excellent first choice target. It dims quite dramatically and the regular brightness changes are obvious to the naked eye. The table below contains date and time information of Algol's minima for May 2018 for various World time zones that cover most regions of Europe, America, China and Australia. For time zones not listed, local eclipse times can be calculated by adjusting the table to fit to the observer's local time.

Algol eclipse dates and times for May 2018